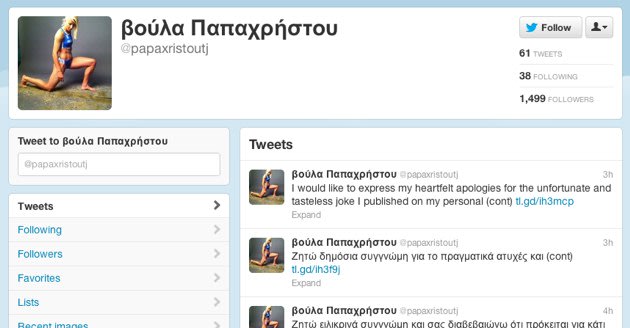 Greek athlete learns that nothing you say on the internet can be easily washed away
When you're in the spotlight as much as Olympic athletes are, it pays to keep your personal opinions — and tasteless sense of humor — to yourself. Voula Papachristou, a Greek track star, learned that the hard way after she posted a racist tweet to her Twitter account which promptly got her banned from the games.
The tweet — which has since been deleted — was written in Greek, but roughly translates to: "With so many Africans in Greece... At least the West Nile mosquitoes will be eating home-made food!"
Once the Greek Olympic Committee learned of the cruel message, Papachristou was immediately removed from the country's roster. Once it became clear that her tweet wasn't as humorous as she perhaps thought it was, the Greek track star tweeted an apology:
"I would like to express my heartfelt apologies for the unfortunate and tasteless joke I published on my personal Twitter account. I am very sorry and ashamed for the negative responses I triggered, since I never wanted to offend anyone, or to encroach human rights.
My dream is connected to the Olympic Games and I could not possibly participate if I did not respect their values. Therefore, I could never believe in discrimination between human beings and races.
I would like to apologize to all my friends and fellow athletes, who I may have insulted or shamed, the National Team, as well as the people and companies who support my athletic career. Finally, I would like to apologize to my coach and my family."
Unfortunately for Papachristou, her much more eloquent atonement did little to save her Olympic dreams. Her next chance to compete on the world stage will come in 2016. [via The Next Web]
This article was written by Mike Wehner and originally appeared on Tecca
at 12:25 PM