... video games are kind of like breakfast cereal – there are plenty to choose from and some are healthier than others. The whole family can enjoy them and they are an important part of an overall sensible and well-balanced lifestyle. Balance and moderation is key. Like all technology, I believe that the benefits and risks of video gaming among children must be ultimately determined by their caretakers and, as a result, have an impact on how they parent.

Can social-media activity be used as a tool in psychological diagnosis? The jury's still out, but a study from researchers at the University of Missouri found a link between social anhedonia and a decrease in Facebook activity, which suggests that therapists can use patients' Facebook profiles to better understand their mental illnesses. 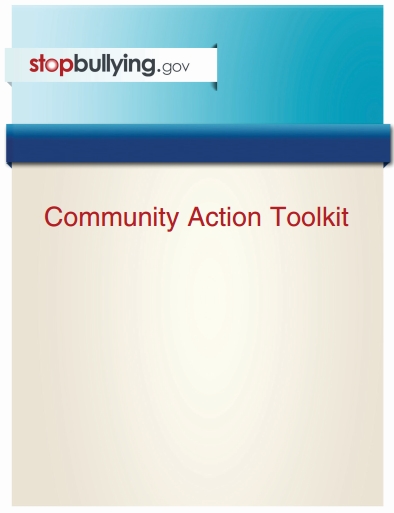 Trends in Bullying and PeerVictimization 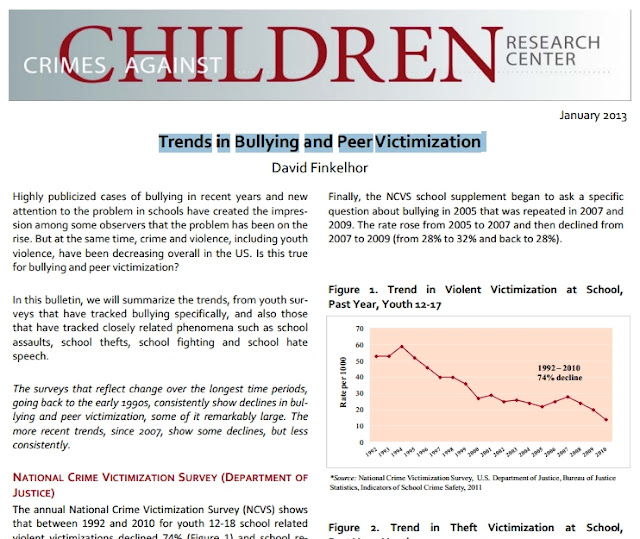 Study of seventh and eighth graders finds no difference between boys, girls

Bullying, whether it's physical aggression or spreading rumors, boosts the social status and popularity of middle school students, according to a new UCLA psychology study that has implications for programs aimed at combatting school bullying. In addition, students already considered popular engage in these forms of bullying, the researchers found.
The psychologists studied 1,895 ethnically diverse students from 99 classes at 11 Los Angeles middle schools. They conducted surveys at three points: during the spring of seventh grade, the fall of eighth grade and the spring of eighth grade. Each time, students were asked to name the students who were considered the "coolest," the students who "start fights or push other kids around" and the ones who "spread nasty rumors about other kids."
Those students who were named the coolest at one time were largely named the most aggressive the next time, and those considered the most aggressive were significantly more likely to be named the coolest the next time. The results indicate that both physical aggression and spreading rumors are rewarded by middle school peers.
"The ones who are cool bully more, and the ones who bully more are seen as cool," said Jaana Juvonen, a UCLA professor of psychology and lead author of the study. "What was particularly interesting was that the form of aggression, whether highly visible and clearly confrontational or not, did not matter. Pushing or shoving and gossiping worked the same for boys and girls.
"The impetus for the study was to figure out whether aggression promotes social status, or whether those who are perceived as popular abuse their social power and prestige by putting other kids down," she said. "We found it works both ways for both 'male-typed' and 'female-typed' forms of aggression."
The research is published online in the prominent Journal of Youth and Adolescence and will be appear in an upcoming print edition of the journal.
The study implies that anti-bullying programs have to be sophisticated and subtle to succeed.
"A simple message, such as 'Bullying is not tolerated,' is not likely to be very effective," Juvonen said, when bullying often increases social status and respect.
Effective anti-bullying programs need to focus on the bystanders, who play a critical role and can either encourage or discourage bullying, said Juvonen, who has conducted research on bullying since the mid-1990s and serves as a consultant to schools on anti-bullying programs. Bystanders should be made aware of the consequences of spreading rumors and encouraging aggression and the damage bullying creates, she said.
Juvonen's current research is federally supported by the National Science Foundation and the National Institutes of Health's National Institute of Child Health and Human Development.
Juvonen and her colleagues reported in 2003 that bullies are popular and respected and are considered the "cool" kids.
The rumors middle school students spread often involve sexuality (saying a student is gay or sexually promiscuous) and family insults, she said.
Like middle school students, Juvonen noted, non-human primates also use aggression to promote social rank (although gossiping is obviously limited to humans).
Co-authors of the new study are former UCLA psychology graduate student Yueyan Wang and UCLA psychology doctoral student Guadalupe Espinoza.
In previous research, Juvonen and her colleagues have reported that nearly three in four teenagers say they were bullied online at least once during a recent 12-month period, and only one in 10 reported such cyber-bullying to parents or other adults; that nearly half of the sixth graders at two Los Angeles–area public schools said they were bullied by classmates during a five-day period; that middle school students who are bullied in school are likely to feel depressed, lonely and miserable, which in turn makes them more vulnerable to further bullying incidents; and that bullying is pervasive.
"Bullying is a problem that large numbers of kids confront on a daily basis at school; it's not just an issue for the few unfortunate ones," Juvonen has said. "Students reported feeling humiliated, anxious or disliking school on days when they reported incidents, which shows there is no such thing as 'harmless' name-calling or an 'innocent' punch.'"
Juvonen advises parents to talk with their children about bullying before it ever happens, to pay attention to changes in their children's behavior and to take their concerns seriously.
Students who get bullied often have headaches, colds and other physical illnesses, as well as psychological problems.
###
UCLA is California's largest university, with an enrollment of more than 40,000 undergraduate and graduate students. The UCLA College of Letters and Science and the university's 11 professional schools feature renowned faculty and offer 337 degree programs and majors. UCLA is a national and international leader in the breadth and quality of its academic, research, health care, cultural, continuing education and athletic programs. Six alumni and six faculty have been awarded the Nobel Prize.
For more news, visit the UCLA Newsroom and follow us on Twitter.
at 6:06 PM No comments:

Facebook posts resonate significantly more with human nature than books or even human faces, according to a new study by Laura Mickes and colleagues from the University of California San Diego in the US. The difference in memory between these microblogs and actual published words from a page is as striking as the difference in memory between amnesiacs and healthy controls. The work is published online in Springer's journal Memory & Cognition.

Online social networking is very popular, and allows people to post their thoughts as microblogs, an opportunity that people exploit on Facebook alone over thirty million times an hour. Contrary to what some might think, such 'trivial ephemera' does not vanish quickly from memory - in fact quite the opposite.

Mickes and team investigated memory of microblogs. In a series of experiments with undergraduate students, they compared the memorability of Facebook posts compared to either human faces or sentences from books. They also looked at whether Facebook posts might be memorable because they stimulate social thinking i.e. create links to other people or situations, such as "that is something my friend would post."

Results of the first two experiments showed that participants' memory for Facebook posts was strikingly stronger than for either human faces or sentences from books. And this difference was not attributable to social elaboration i.e. mentally linking posts to other events, situations or people.

The authors also looked at whether Facebook posts were particularly memorable because they constitute coherent and complete ideas. To find out, they compared memory for both news headlines and sentences from stories with reader comments on news or entertainment articles. Their analyses showed that it was reader comments that were most memorable.The remarkable memory for microblogs is thus not due to either their completeness or simply their subject matter, but more likely to some combination of the two and also to the comments being the spontaneously generated natural language of ordinary people.

The authors conclude: "Our work introduces and investigates a new phenomenon - incredible memorability of microblogs. These especially memorable Facebook posts, generated by ordinary people, may be far closer than professionally crafted sentences to tapping into the basic language capacities of our minds. Perhaps the very sentences that were so effortlessly generated are, for such a reason, the same ones that are so readily remembered."

Online 'Shaming' A New Level Of Cyberbullying For Girls : NPR

Many teenagers are living half their lives on social media sites, and they're writing the rules as they go. One online trend 16-year-old Temitayo Fagbenle finds disturbing is something she calls "slut shaming" — using photos and videos to turn a girl's private life inside out. Temitayo reported this story as part of the Radio Rookies program at member station WNYC.